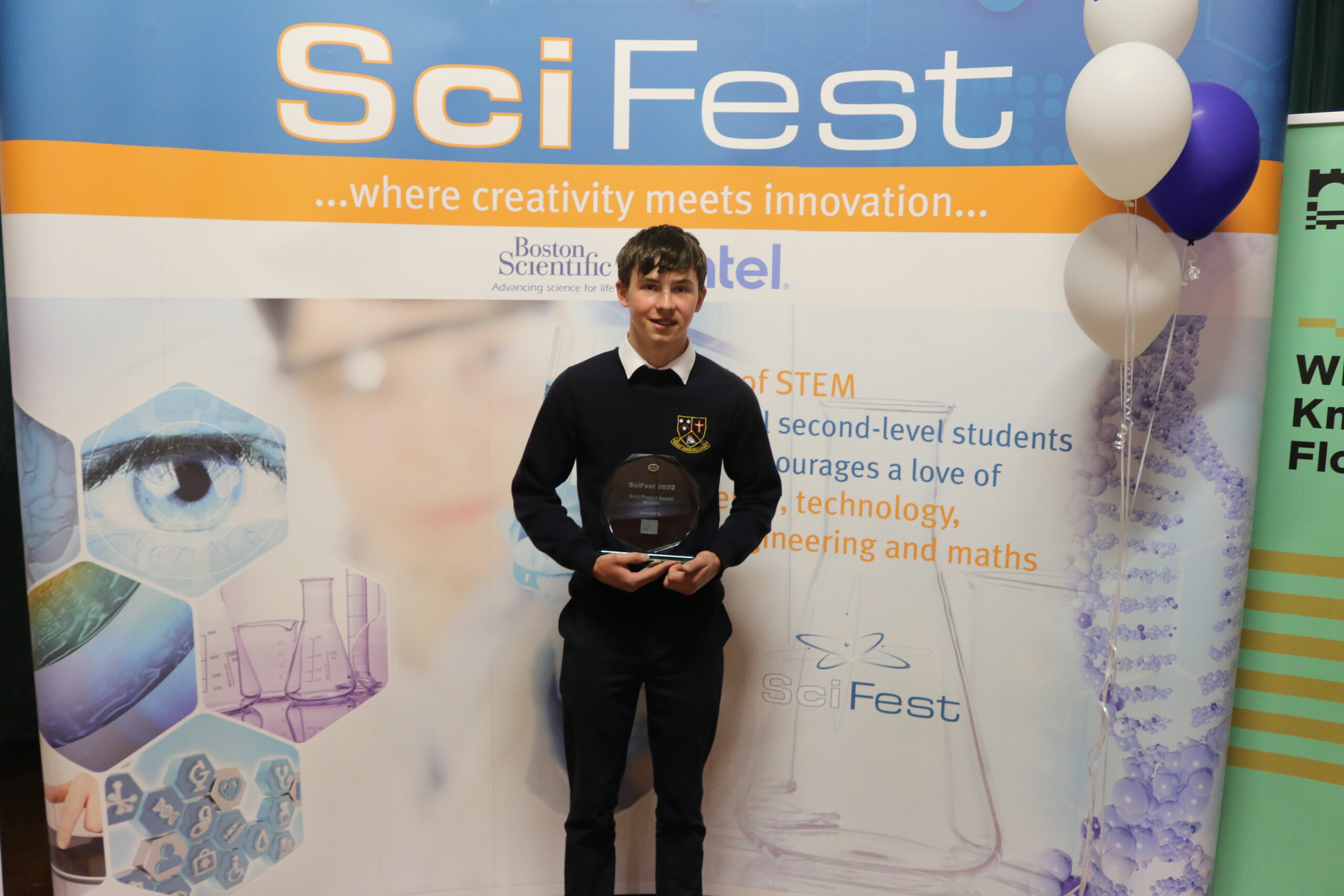 Moate Community School TY students scoop the top prize at SciFest@TUS Athlone. The trio will now go on to compete at the national SciFest finals in November. Dara Shortall accepts the award on behalf of the trio. Photograph: Daire Taylor.

Dara Shortall, Dean Burns and Eoin Murphy, TY students at Moate Community School, won the coveted ‘Best Project Overall’ award for their innovative research into the use of buffer strips to increase biodiversity and water quality in grassland.

The trio, who also won the Regeneron ‘Life Sciences Award’ and placed first in the ‘Intermediate Life Sciences Group Category’ award, will now go on to compete against other regional SciFest winners at the national finals in November 2022.

If successful there, the Moate Community School students will win an all-expenses paid trip to Dallas, USA, to represent Ireland on the international stage at the Regeneron International Science and Engineering Fair (ISEF) 2023.

Accepting the award on behalf of the trio, Dara Shortall acknowledged the support of his school and teacher, Mairead Cusack, and said he was “thrilled” with the result.

The TY student, who lives on a dairy farm, explained how their research could improve the quality of Irish waterways by tackling fertilizer run-off, which can decrease water oxygen levels and lead to dead zones.

“Our project aims to solve this problem by planting a two-meter buffer strip along the edge of waterways on grassland with plants that will absorb nutrients more efficiently from fertilizer before they can reach the waterways…If these nutrients are let run-off into waterways, it can lead to eutrophication, which can lead to fish death,” he said.

To create the buffer strips – a protective zone between a farm and a waterway intended to protect water quality – the trio researched different species of plants, trialing out mustard, radish, phacelia, and grass, before ultimately settling on a mixture of phacelia and black oak seed. 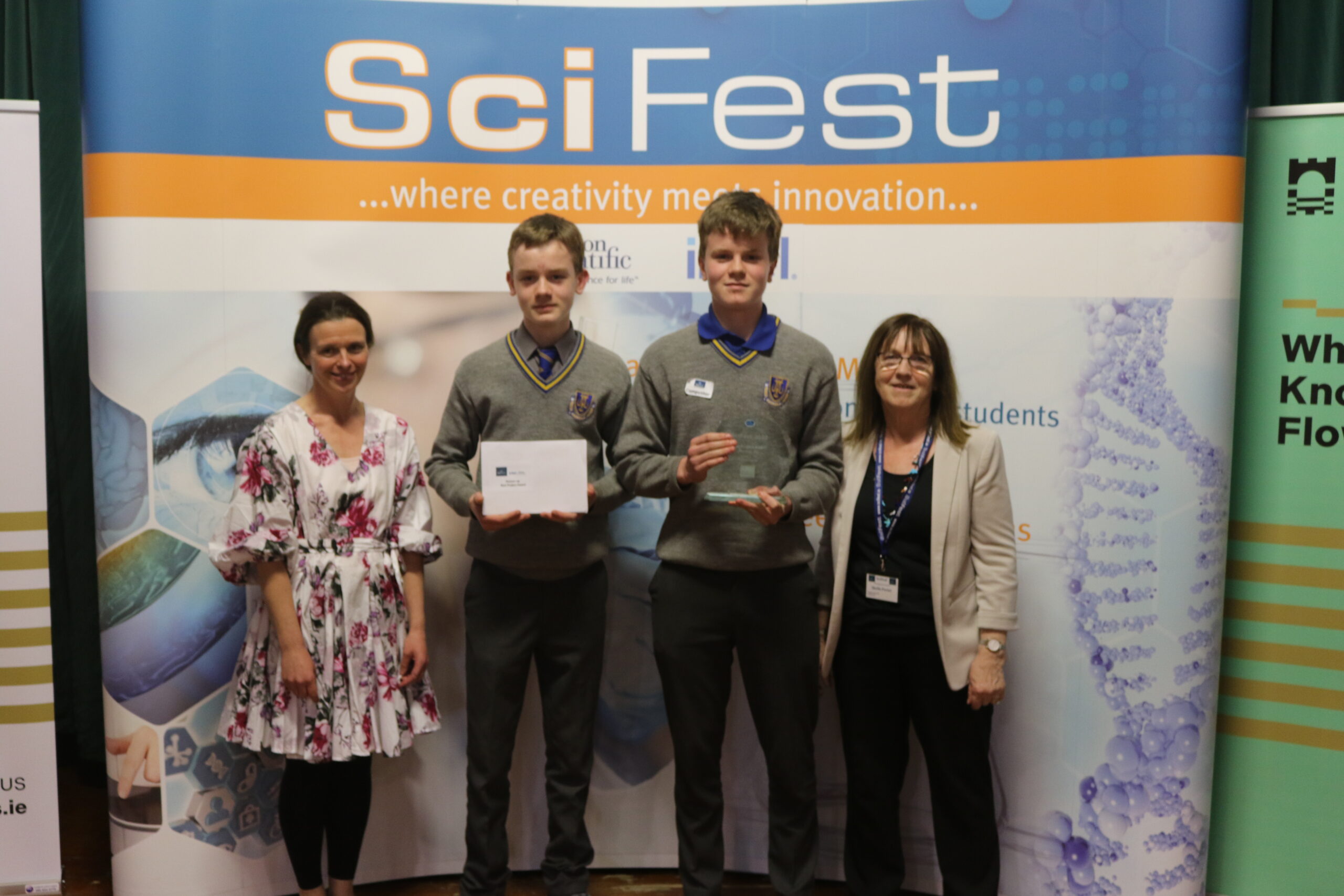 The TY students were among 200 students from 12 secondary schools across the Midlands to compete in this year’s competition, showcasing their passion for and knowledge of science, engineering, technology, and maths.

In total, there were more than 94 projects on display, with competing students presenting on a wide array of scientific topics, including neuroplasticity, climate change, sustainable packaging, the impact of diet on speed and endurance, how caffeine affects cycling performance – and the impact of music on cows’ temperaments.

Commenting on the calibre of this year’s entries, Dr Noreen Morris, co-ordinator of SciFest@TUS in Athlone, said, “As always, the projects entered by the

students were impressive, engaging, and thought-provoking. Students from across the region demonstrated their passion for STEM, which was clearly evident from the high standard of research that went into this year’s entries. SciFest is a competition that aims to encourage students to develop an interest in STEM, while prioritising inclusivity and inquiry-based learning, and it is a competition we are very proud to support”.

Sheila Porter, SciFest CEO and founder, added, “We received a tremendous number of entries again this year and the standard was as high as we’ve come to expect from SciFest participants. At SciFest, our goal is to encourage a love for STEM subjects from an early age, so it is really heartening to receive so many high-quality entries.”

Last year’s SciFest@TUS (Athlone) overall winner Clare Reidy from Our Lady’s Bower, went on to be named the national SciFest STEM Champion 2021 for her investigation into effective building materials for future exploration of Mars.

Clare will represent Ireland at Regeneron ISEF in Atlanta, Georgia, USA, next month.