TUS Culinary Arts Students Sweep the Board at IFEX Belfast

Culinary arts students at TUS Athlone have swept the board at this year’s IFEX competition in Belfast for their edible art sculptures, crafted entirely from chocolate. 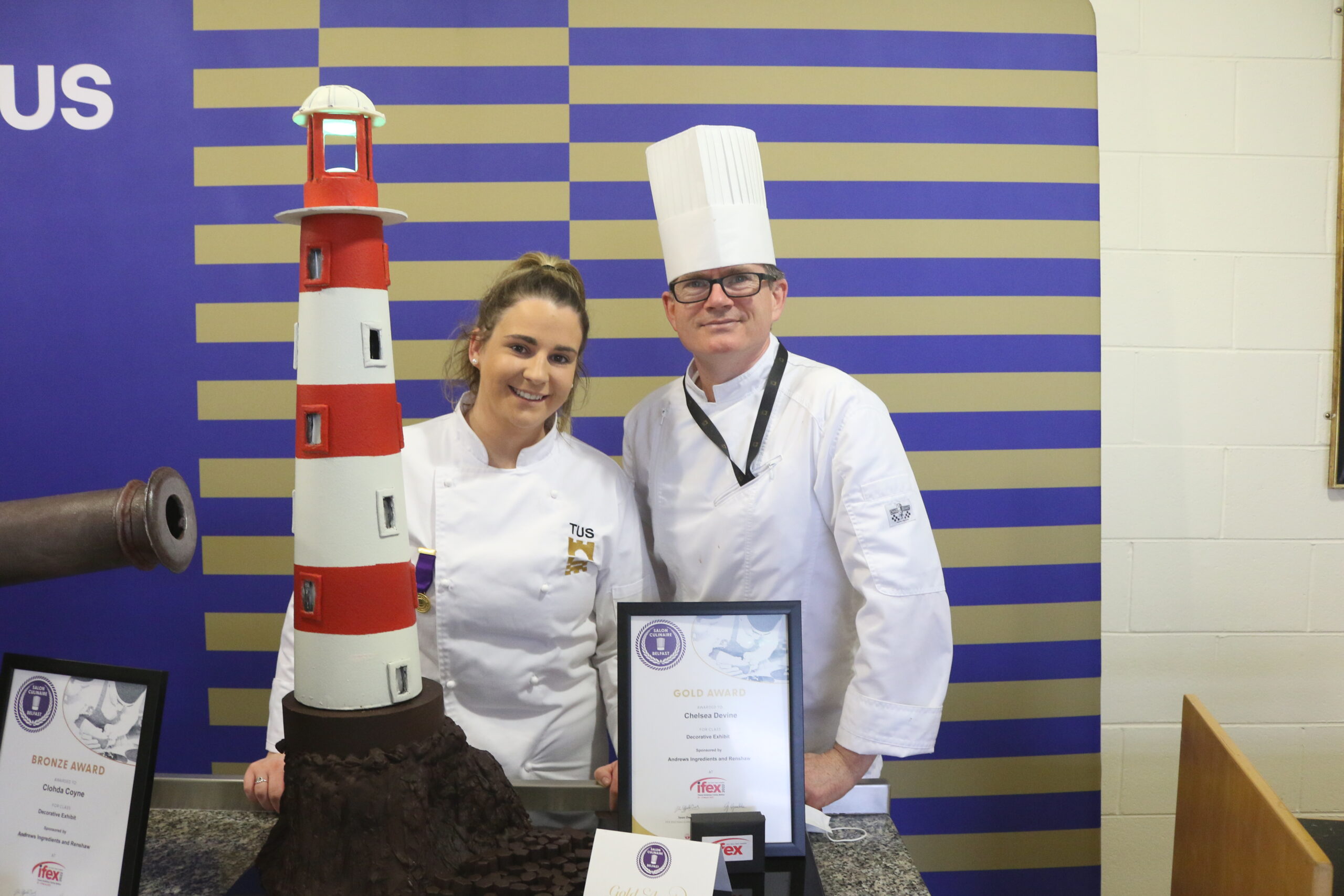 Taking creative inspiration from the works of Amaury Guichon, the host of Netflix’s School of Chocolate and the most followed chocolatier on Instagram, Chelsea says she’s “over the moon” to have taken home the gold.

Competing against industry professionals and culinary students from across the UK and Ireland, Chelsea spent more than 40 hours prepping for the competition and pouring over the technical aspects of chocolate work and centrepiece design.

“We started preparing our chocolate pieces in late January, brainstorming ideas between our classmates. We have spent the last few weeks doing extra hours outside of our college time with our mentor and lecturer, Kevin Ward,” she explained.

“Kevin has pushed us to become the best version of ourselves as chefs; we would not have made it this far without him giving us the knowledge and always teaching us new techniques along the way.”

Clohda Coyne, also a third-year BA in Culinary Arts student at TUS Athlone, was awarded a silver medal for a chocolate sculpture of a ship’s cannon.

Like Chelsea, her work was entered under the “Decorative Exhibit” category, which tasks entrants with creating a free-standing edible art piece using either pastillage, marzipan, chocolate or cooked sugar.

“The IFEX competition has been such an amazing experience all around; we’ve met so many amazing people and learned so much from my peers,” Clohda said.

Luke Ryan, a Higher Certificate in Culinary Arts student at TUS Athlone, also received two awards for his creative samurai sword sculpture at the IFEX in what was his first time entering a culinary competition.

“It was a fantastic opportunity to meet chefs full with passion and devotion. I feel proud of my certificates of merit, and I am incredibly appreciative of the guidance that was given to me from the lecturers and hope to take home the gold next time,” he said. 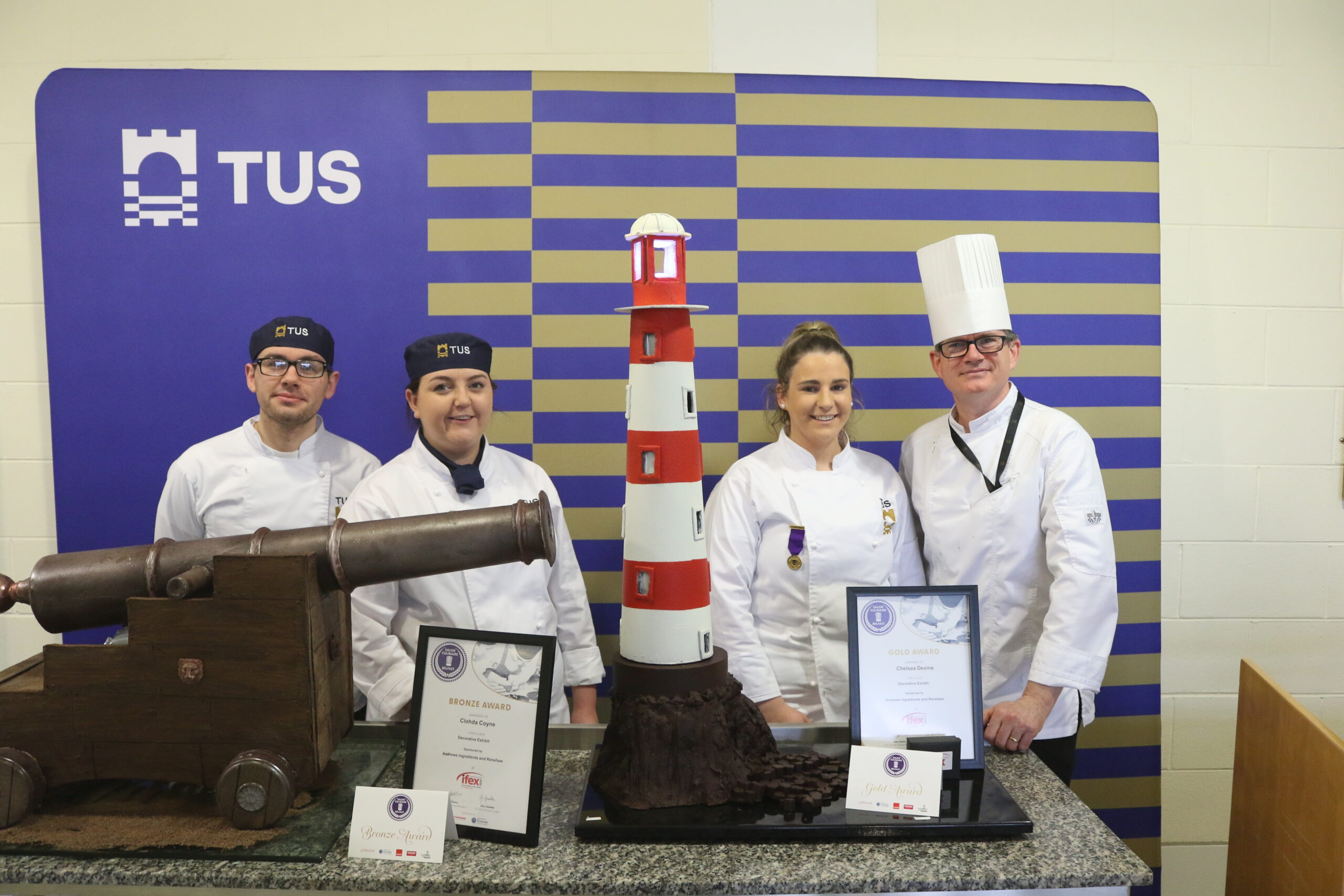 Kevin Ward, a culinary arts lecturer at TUS Athlone and himself an award-winning chocolatier, congratulated the trio, stressing the level of work they put in to compete at an international level and win.

“Our students have represented the university with distinction and have demonstrated what can be achieved with perseverance and practice,” he said, adding, “It has been a pleasure for me and a great learning experience for the students, but overall, it has been a lot of fun.”

Head of Department Dr Anthony Johnston also congratulated the students on their great achievement, noting that it was a team effort supported by lecturers, technicians and support staff and friends and family.

The edible chocolate sculptures were judged on various criteria including originality, level of difficulty and quality of workmanship.

All pieces will go on display in the Department of Hospitality, Tourism and Leisure lobby, TUS Athlone, in the coming days.

IFEX 2022 is Northern Ireland’s longest-standing foodservice and hospitality trade exhibition and attracts exhibitors from all over the UK and Ireland.